On 10 December 2013 at 2245 the general cargo ship PAULA C was heading south-west in the Dover Strait traffic separation scheme. It was a dark, clear night with good visibility. She was in ballast, heading for Poole, England.

Prior to passing Dover the second officer had kept ten watches as the sole watch keeper, most of which were during the passage from Spain to Germany and in comparatively quiet waters. He had joined PAULA C as a supernumerary junior officer in August and for his first three months on board had accompanied the ship’s previous second officer (also relatively junior) on bridge watches.

During the watch handover the second officer noticed a number of radar targets following the south-west traffic lane, in particular a target on PAULA C’s starboard quarter at a range of 1.9nm. Using the AIS data shown on the radar display he identified the radar target as DARYA GAYATRI, a bulk carrier in ballast on passage to Baltimore, USA. He also identified that DARYA GAYATRI was overtaking PAULA C with a closest point of approach (CPA) of 0.5nm.

At 0011 the second officer saw a ship 20º off the starboard bow. Through binoculars he was able to see the ship’s port side light and its deck lights. From the target’s AIS data shown on the port radar display he identified that the ship was at a range of 3.9nm and had a CPA of 0.1nm. The second officer did not acquire the ship on the ARPA or use the AIS data to determine the ship’s name or status. He assessed that the ship was crossing PAULA C’s bow from starboard to port and that PAULA C was the give way ship.

Contrary to the second officer’s assessment, the ship ahead of PAULA C was not a power driven ship but the Belgium registered beam trawler RAQUEL which was displaying the appropriate lights for a power-driven ship underway and engaged in trawling (which trawling aspect the second officer had missed, possibly due to the glare from her deck lights, which were switched on). She was towing her nets on a course of 153º at a speed of 4.8kts.

RAQUEL’s skipper was on watch and he was monitoring other ships in the area visually, by radar and by AIS. The skipper had seen PAULA C and DARYA GAYATRI following the traffic lane and he was aware that he needed to take action in order to keep out of their way. At 0013, with PAULA C 3.4nm off the trawler’s port bow, RAQUEL’s skipper began the first of several alterations to port, which were intended to eventually turn the fishing ship onto a north-westerly heading. Because RAQUEL’s manoeuvrability was limited by its fishing gear, a single broad alteration was not possible. 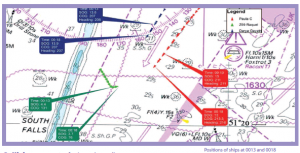 At 0018 PAULA C’s second officer adjusted the autopilot heading to 230º, an alteration of almost 20 degrees to starboard in line with his understanding that he was the give way ship. RAQUEL and PAULA C were 1.82nm apart, no sound signal was made and the second officer did not look over the starboard quarter to make sure that there were no other ships in close proximity.

As PAULA C steadied onto her new heading, the second officer noticed that the RAQUEL, which was now almost directly ahead, had altered course to the north-east. This made no sense to the OOW. He did not understand why a power-driven ship that had been crossing the traffic lane would manoeuvre in this way. In response, the OOW adjusted PAULA C’s heading further to the starboard. By 0022 PAULA C’s heading was 266º and the fishing ship was about 30º off of her port bow at a distance of 1.1nm. DARYA GAYATRI was on the PAULA C’s starboard beam at a distance of 0.98nm.

Over the next 2 minutes, PAULA C’s second officer adjusted the autopilot to alter the ship’s heading to port (as far as 253º) and then back to starboard up to 287º. PAULA C’s changes in heading were observed on radar by the duty Dover Coastguard (DCG) watch officer. He called PAULA C via VHF radio channel 11 in order to clarify the OOW’s intentions:

Being unclear of what action to take and having lost situational awareness, the second officer interpreted the Coastguard’s question as a suggestion:

Immediately after the exchange the second officer selected hand steering and applied 35 degrees of starboard helm. PAULA C started to turn quickly to starboard. He did not check visually or by radar that the intended manoeuvre was safe or make a sound signal to indicate he was turning to starboard. He was unaware that the DARYA GAYATRI was 51m off PAULA C’s starboard beam.

On the DARYA GAYATRI the second officer was on watch. He was relatively experienced and had transited the Dover Straits on 3 or 4 previous occasions. He was accompanied by an AB lookout and at 0023 had determined that PAULA C ship would now pass about 2 cables ahead of his ship. DARYA GAYATRI’s OOW was also aware that RAQUEL was ahead of him and was engaged in fishing. He was closely monitoring both ships.

Immediately after DARYA GAYATRI’s OOW finished talking on the VHF, he changed to hand-steering and instructed his lookout to take the helm.

Though the officers onboard both ship’s were ‘in doubt’, neither had so far called the master to the bridge.

At 0026 the OOW on the DARYA GAYATRI ordered the helm hard to port; no sound signal was made. By now, PAULA C was turning through a heading of 297º at an increasing rate. DARYA GAYATRI’s OOW was not aware that the PAULA C was turning to starboard. He assumed that she would pass ahead of his ship. He expected the ships to pass starboard to starboard because of his own alteration to port. 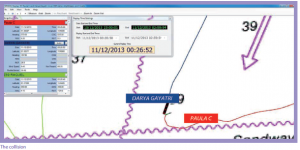 Shortly after 0026, 18 seconds after port helm was applied, DARYA GAYATRI started to turn to port. At the same time, the second officer noticed that PAULA C was turning towards the bulk carrier. He immediately ordered the lookout to put the helm hard-to-starboard and then telephoned the master in his cabin to inform him that there was another ship “very close”. He attempted to slow down by putting the engine telegraph astern for several seconds but returned it to full ahead after assessing that there was no time for an astern movement to take effect.

At 0026 PAULA C’s port bridge wing collided with DARYA GAYATRI’s port anchor. The master of the DARYA GAYATRI arrived on the bridge just as contact was made. At the time of the collision DARYA GAYATRI was heading 198º at 12.9kts; PAULA C was heading 070º at 6.2kts.

Meanwhile RAQUEL, who had started to alter course to port at 0013, had already exited the TSS and manoeuvred clear of any danger.

The Marine Accident Investigation Bureau (MAIB)) determined, among other things, that;